You will love these fluffy, delicious apple walnut cinnamon rolls, especially during the holiday season!

Tis the season of cinnamon rolls around my house! I love making them, gifting them, and most of all – eating them! I wanted to give classic cinnamon rolls a holiday twist so I decided to make apple walnut cinnamon rolls. They taste like the perfect blend of apple pie and cinnamon rolls, according to my husband! They’re sure to be a crowd pleaser for holiday gatherings and festivities.

Plus, they incorporate one of my favorite holiday flavors – walnuts! As you probably know if you’re a regular reader, I love using California Walnuts in many of my recipes!

I have grown up watching my brother make cinnamon rolls. Baking with yeast can be a little intimidating, but he’s taught me well! They turn out perfectly every single time! Stay tuned, I’ll share all my tips and tricks! 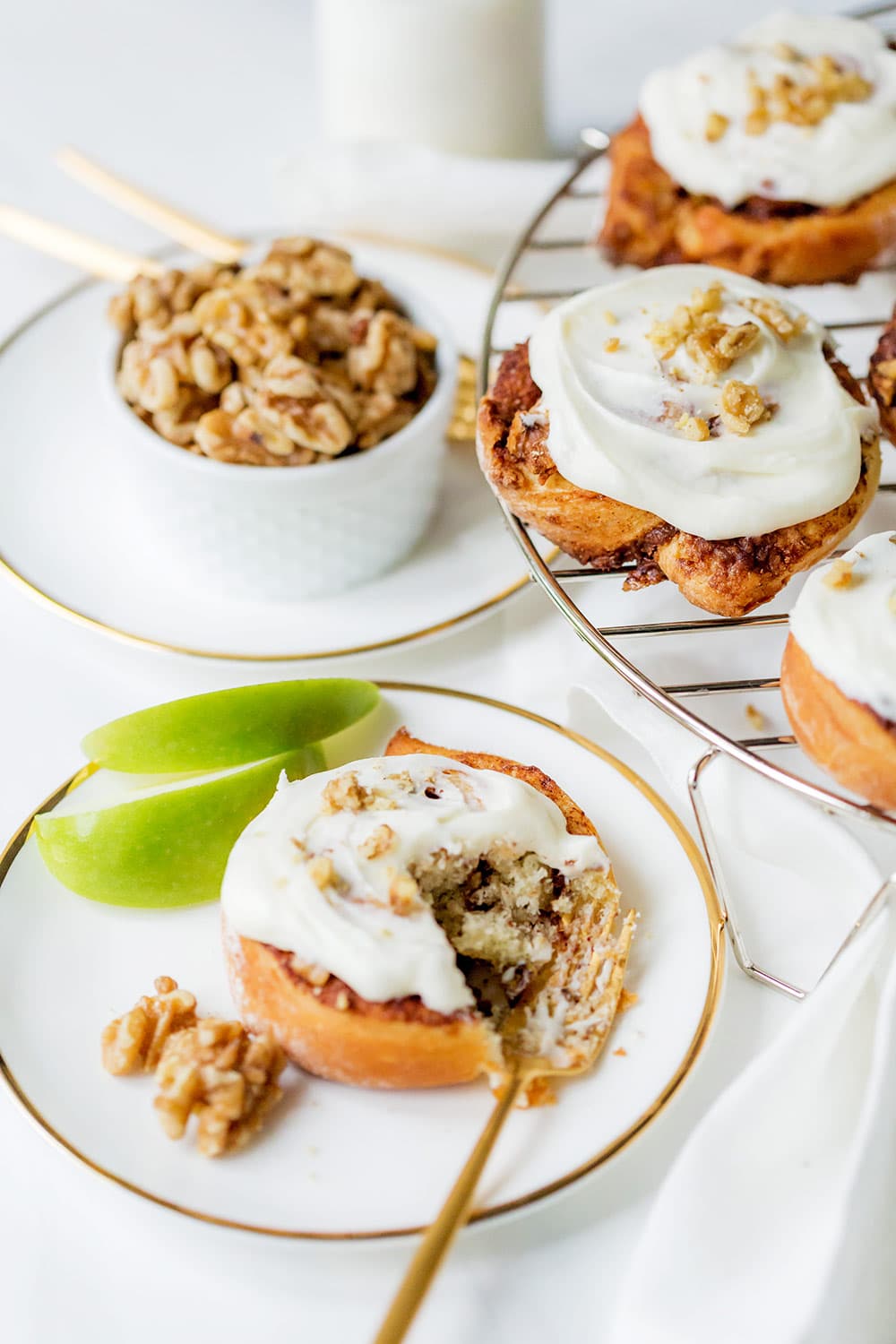 Your house will smell amazing with the aromas of apples, cinnamon, and walnuts. If someone could turn that into a candle scent, I would burn it every single day. It’s amazing!

Let’s talk about a few tips and tricks for making these apple walnut cinnamon rolls. For the filling, I like to use a mix of cinnamon and apple pie spice. Apple pie spice contains cinnamon but it also has a few other spices (like nutmeg) that really give these cinnamon rolls that holiday flavor. You can certainly just use cinnamon, of course, they’ll still taste irresistible! 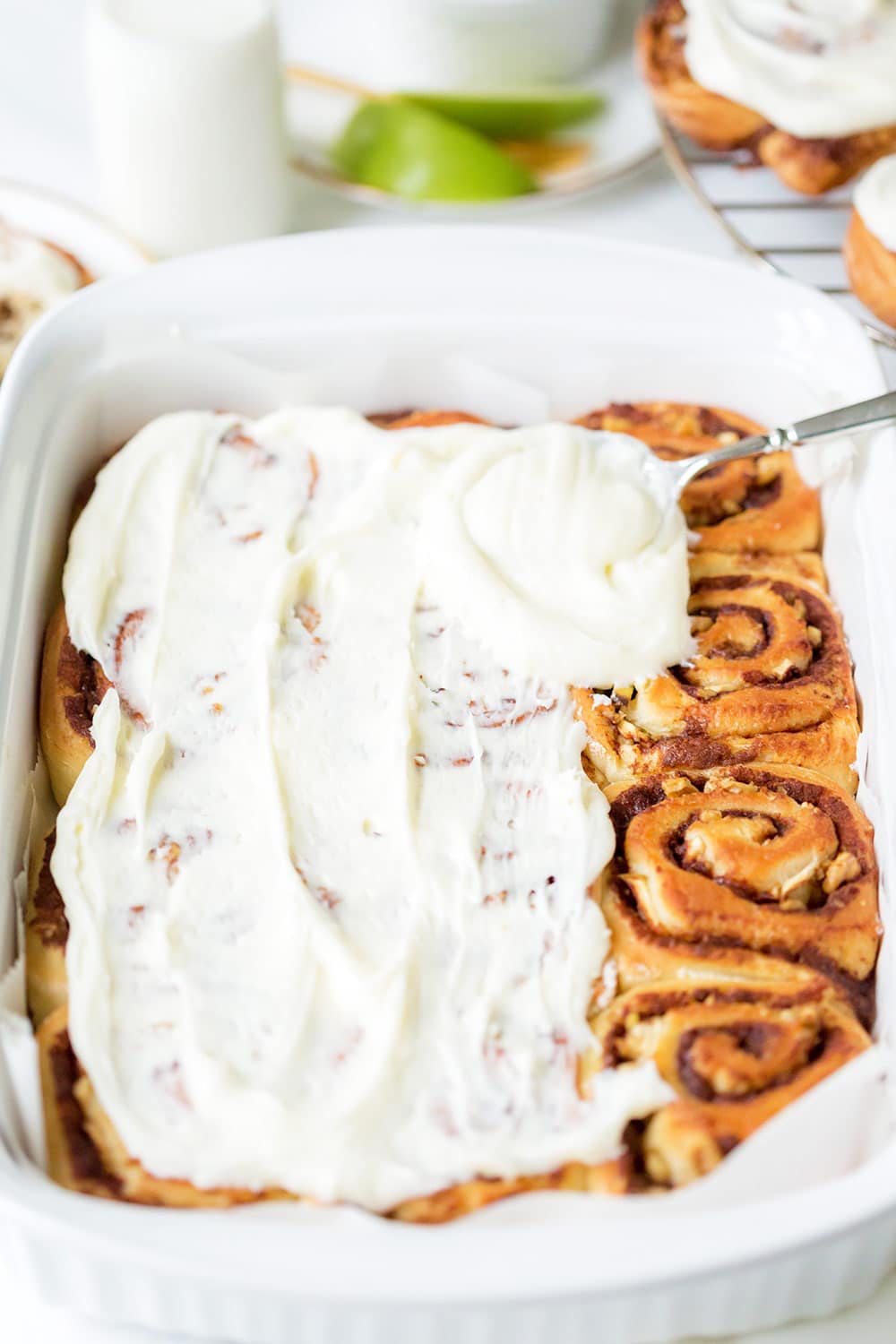 Next, I recommend combining your butter and filling ingredients in a small bowl to make a sort of “paste” and press it down on the rolled out dough. I like this better than the butter and sprinkling method because all the filling stays right where it should be, no escaping! 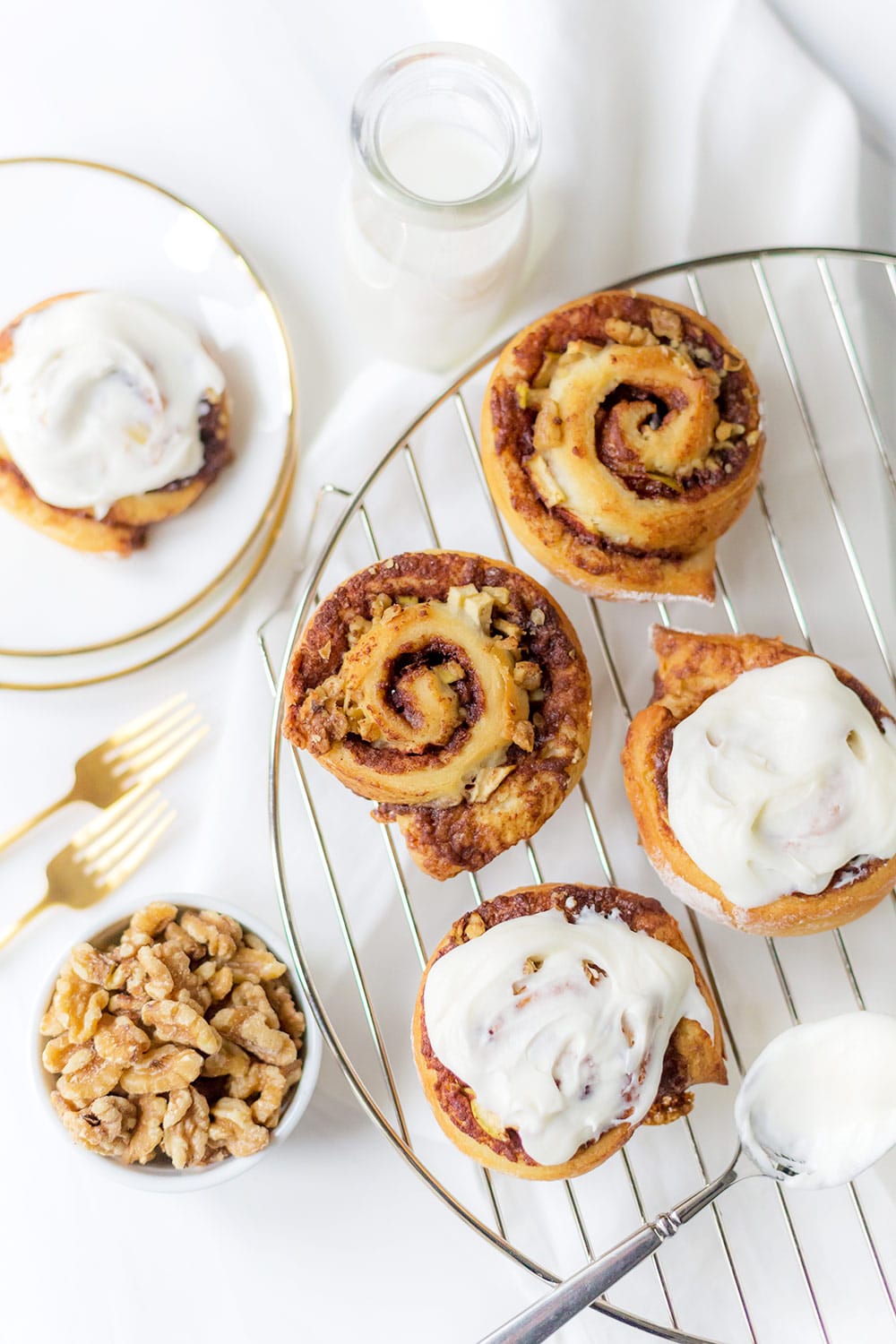 I used Granny Smith apples, diced, but you can use any baking variety you prefer. The apples soften while baking and get coated in all the cinnamon and apple pie spice. It’s heavenly. Plus, the walnuts give these cinnamon rolls the perfect nutty flavor as well as a boost of good fats and antioxidants. They remind me of the holiday season so they’re my favorite addition in these cinnamon rolls!

While we’re chatting walnuts are one of my favorite ingredients to cook and bake with, so check out a few of my other favorite walnut recipes below…

Back to the recipe! Depending on how thick you cut your cinnamon rolls, you can squeeze them all into a 9×13 baking dish or you can bake a few extra on a parchment-lined baking pan or smaller baking dish. I usually cut mine about 1 1/2″ thick. 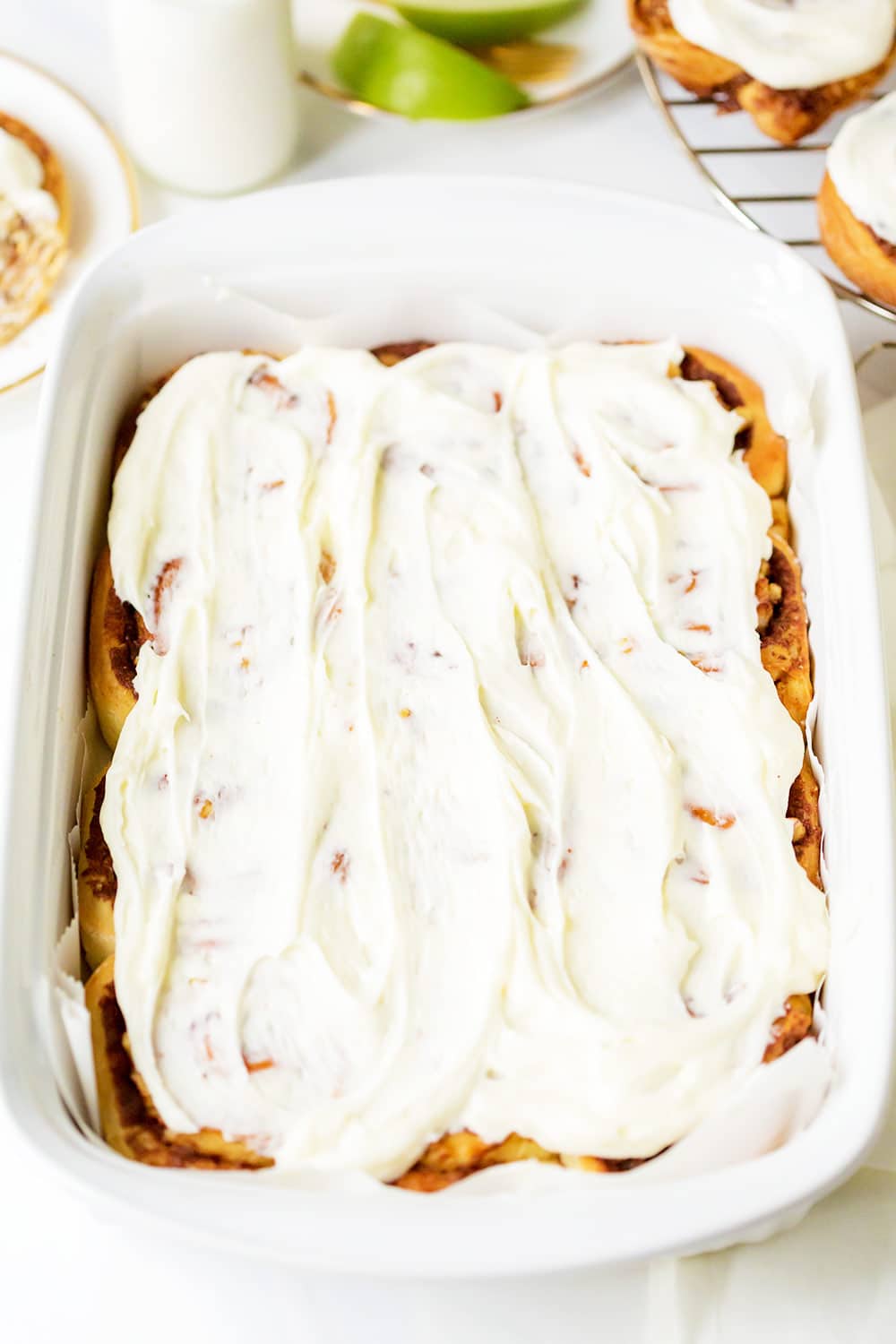 For the Cinnamon Rolls

For the Cream Cheese Icing 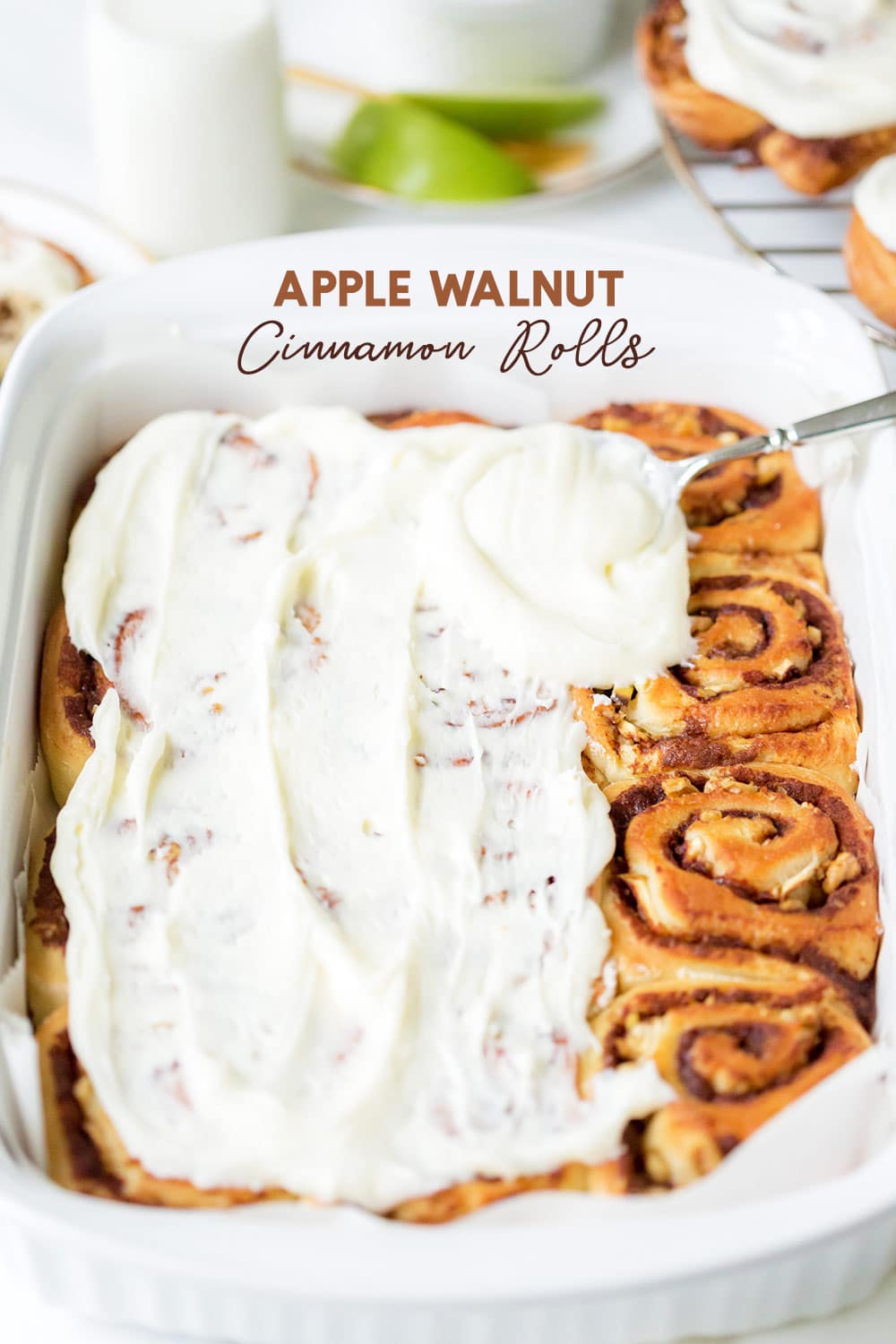 I hope these Apple Walnut Cinnamon rolls make it to your table this holiday season!

This post is sponsored by the California Walnut Board. Thanks for supporting our partners!