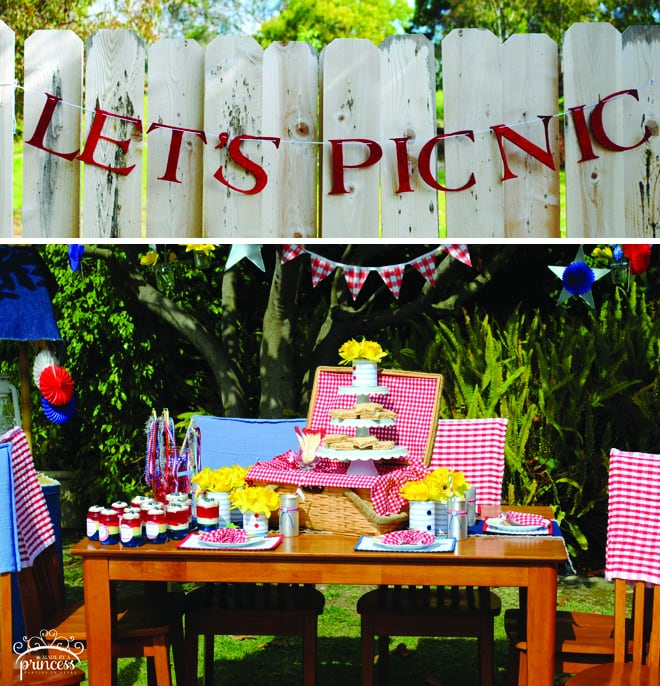 Time to celebrate summer with a picnic – PATRIOTIC style! From Memorial to Labor Day and July 4th in between, there are lots of reasons to have some super cute red, white + blue picnic ideas to have tucked away for summer celebrations. This party feature submitted by Kylie Jenkins makes me want to run out and plan a picnic-style party right now! We’re finally enjoying warmer weather! Kyle entered a challenge hosted by Everyday Party Magazine for this pretty party set-up and hers WON! The rules? Use printables by Chickabug and don’t go over $150! How fabulous to know that a cute picnic party this darling can be done on a budget! Be sure to check out the bottom of the post to see how she did it! 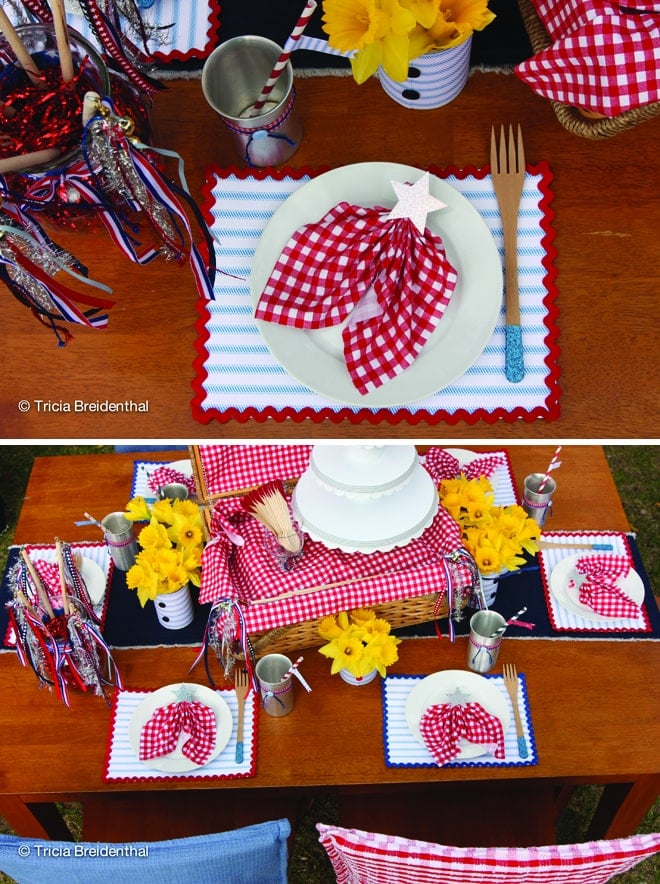 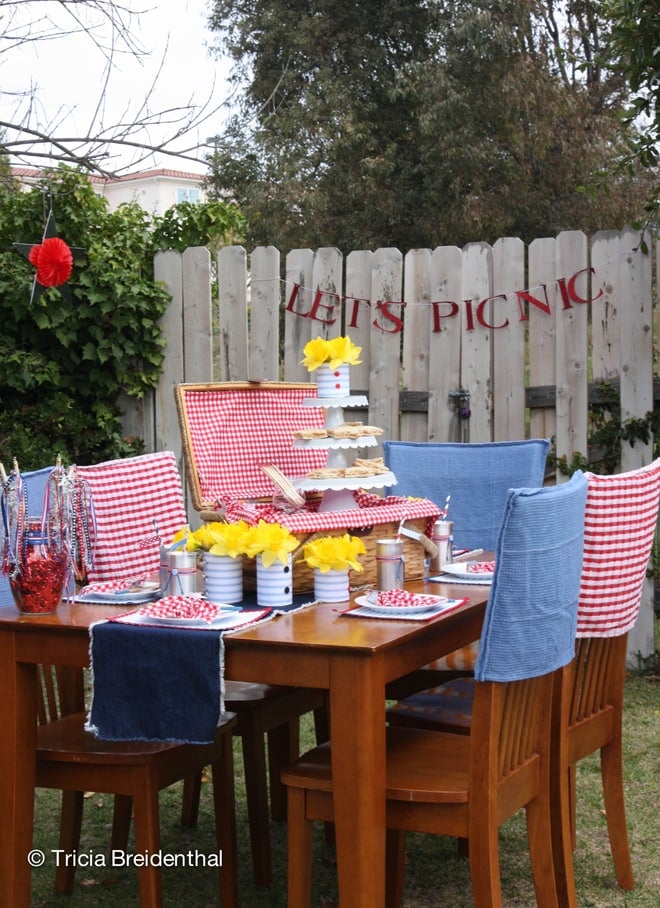 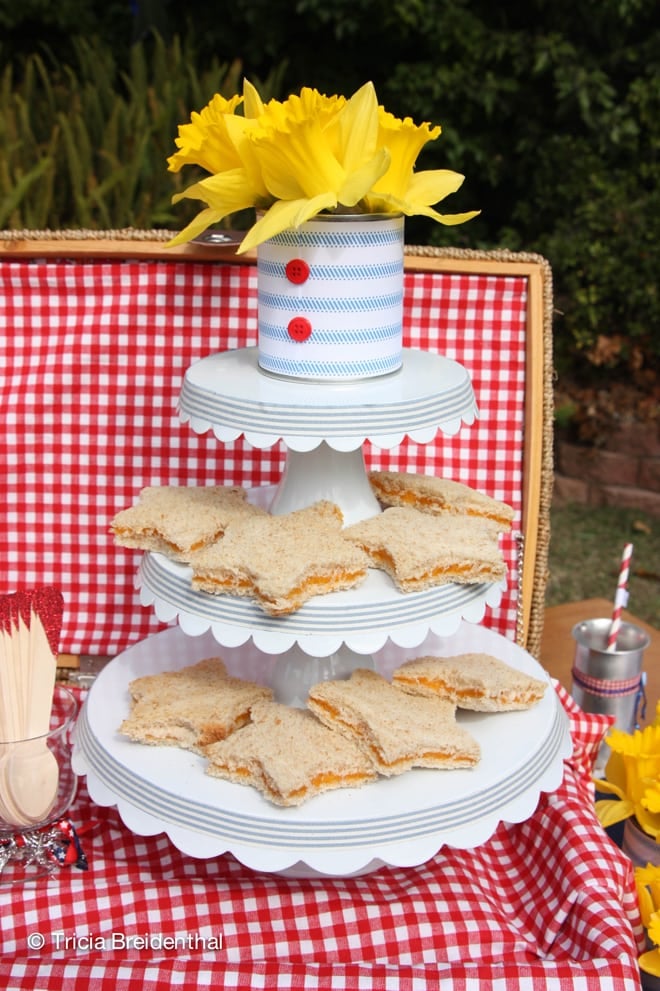 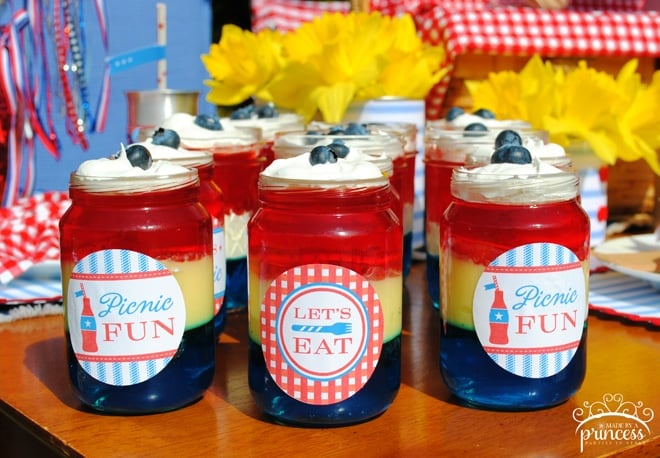 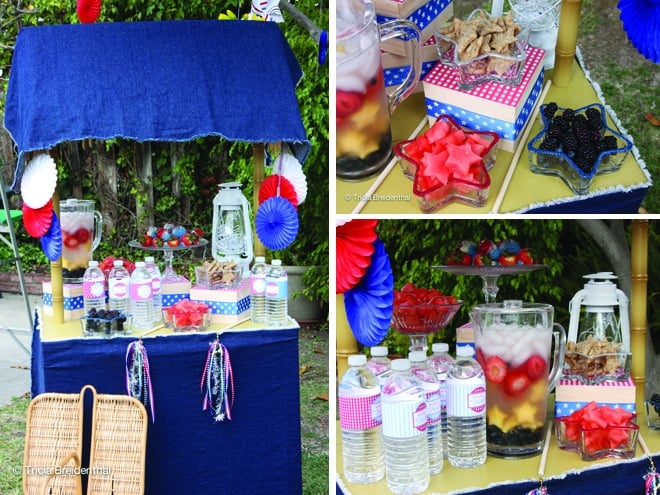 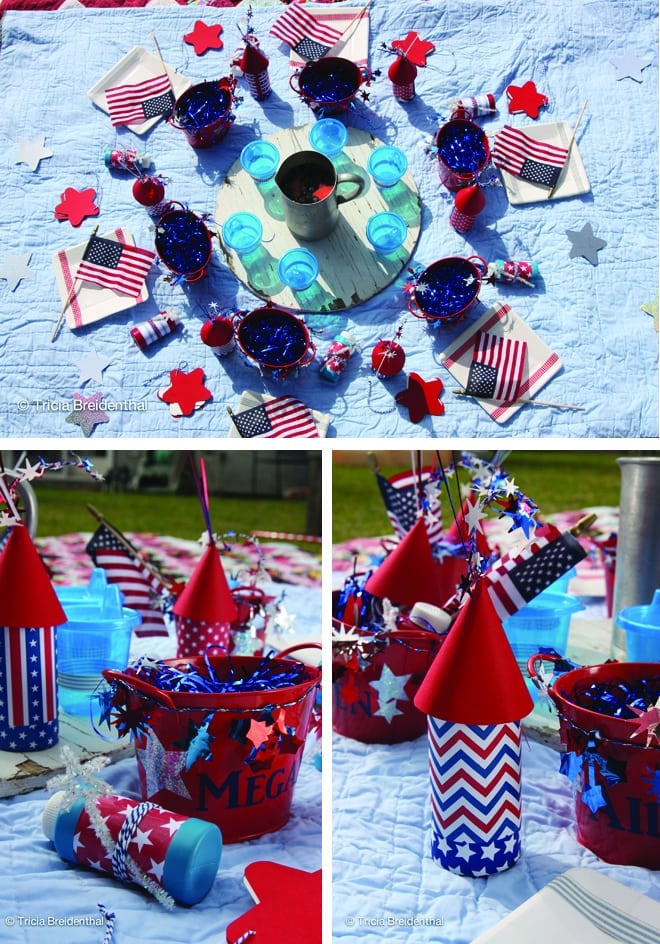 How to Host a Patriotic Picnic Party!

We are lucky to have all the details to this fabulous party straight from Kylie herself! We know you’ll find lots of inspiration among the details!

“Decorations: I found denim fabric and red and white gingham on the clearance table at my local fabric store. I made a no-sew bunting for the back fence by cutting out triangles and hot gluing them to double sided bias tape. I then cut a piece to use as a table runner and a skirt and awning for my Pottery Barn tiki table.  I wanted the frayed edge look so I washed and dried the pieces and they came out just perfect.

I found silver stars and red, white, and blue tissue fans at Party City that I thought would be perfect in the tree.  Some of the fans I stuck in the middle of the star because I thought the star needed some dimension.  I borrowed mason jars from Pat of ZPerfect Party and wrapped the tops with blue and white twine and hung in the trees with daffodils and pinwheels I made.  The pinwheels were really easy to make!  I attached them to some paper straws and used silver star brads to affix.

For the table I borrowed a picnic basket from Roni of Roni’s Sugar Creations and used that as my centerpiece. I lined the inside with red and white gingham fabric I found at Joann’s and used that same fabric to make napkins.  The napkin “rings” were made with blue ticking fabric tape I found at Paper Source and I made a star with my Silhouette Cameo using shimmer paper I had on hand.  Last month I purchased the dessert stand from PBK and thought it would be perfect to use for the picnic.  Since it’s all white I dressed it up a bit with the blue ticking fabric tape along the edges.  I printed the blue ticking paper on cardstock and trimmed with red and navy ricrac for color.  I had some wooden forks and spoons in my party collection.  I love sparkle and glitter so I just had to add a little bling to my table by glittering the forks and spoons.  I started collecting cans awhile back so I printed blue ticking paper and wrapped them around the cans.  I was going to use sunflowers but daffodils were on sale at the grocery store so I opted for those. I think the yellow is the perfect accent and just makes the table pop.  I collect buttons, for no particular reason, and figured it would be an easy and free way to add a little something to the cans.  I dabbed a little bit of hot glue so I could pop them off and use them again for another project.

The vintage aluminum cups were purchased last year for my daughter’s first birthday party and thought they would be perfect.  I dressed them up with fabric tape from PaperSource, ribbon I had purchased from a local scrapbook store, and a button.  When the party was over all I had to do was take off the tape and wash them out…good as new, vintage new.  The chairbacks were made from dishtowels I found at Dollar Tree.  I trimmed one edge to fit the width of my chair and sewed them together.  Super easy and cheap project that was definitely a wow at the party.  I purchased paper straws from Crafts by Jilly and used the drink flags from the set.

Food Bar: The tiki table served as the food bar.  I purchased 3 star bowls from Dollar Tree and glammed them up a bit with glitter.  A couple months ago I found wooden boxes at Target and had no idea what I was going to do with them but knew I had to have them.  I printed up some red gingham paper from the set and cut them to fit the top and bottom of the box. One side of the box was actually open so I hadn’t intended on setting anything on it but just didn’t want it to look unfinished.  I had star ribbon left over from last 4th of July so I wrapped it around the box and secured with double stick tape.

Food: I made watermelon and tomato salad, a Southern Living recipe that I make every summer.  I cut stars out of watermelon and pineapple and put them in the water pitcher along with blueberries.  I also put watermelon stars and blackberries and blueberries in the glass star bowls.  I also made parmesan star bites out of pizza dough.  I had seen 4th of July jello online and knew I wanted to do that. I used mason jars for the ones for the moms which had a cheesecake middle and baby food jars for the kids which had a vanilla pudding middle.  I also made star grilled cheese sandwiches for the kids.

Kid stuff: My daughter loves fairy wands so I thought it would be fun to make them for the kids.  I called them firework wands because the silver ribbon I used make them sparkle.  I bought dowels, fishing swivels, and split rings at Walmart and hooks at Home Depot.  These were fairly easy to make, just time consuming.  The kids loved them!  I found red little buckets, blue sippy cups, blue shred, bubbles, crayons, and square white plates at Dollar Tree.  I made labels for the bubbles out of paper from the set, a star bubble wand from pipe cleaners in my craft collection, decorated with twine from Crafts from Jilly.  The rockets held the crayons!  I made them from a wrapping paper roll I had just finished and cut them down to the right size. I covered them in paper, made a rocket top out of cardstock, and found the “explosion” in one of my craft drawers.  I knew it was a good idea to keep it! I made little star coloring books out of cardstock from my collection using my Silhouette Cameo and tied together with twine.  The flags I found in my garage, probably from last year – I just forgot where they were when I needed them!  I used the fabric tape to dress up the sippy cups and plates.  I made the names and stars on the buckets with vinyl from Joanns and my Silhouette Cameo.”

A patriotic party would definitely be perfect for this Honey Ice Cream with Strawberries that I featured over on Sulia! Check it out here!