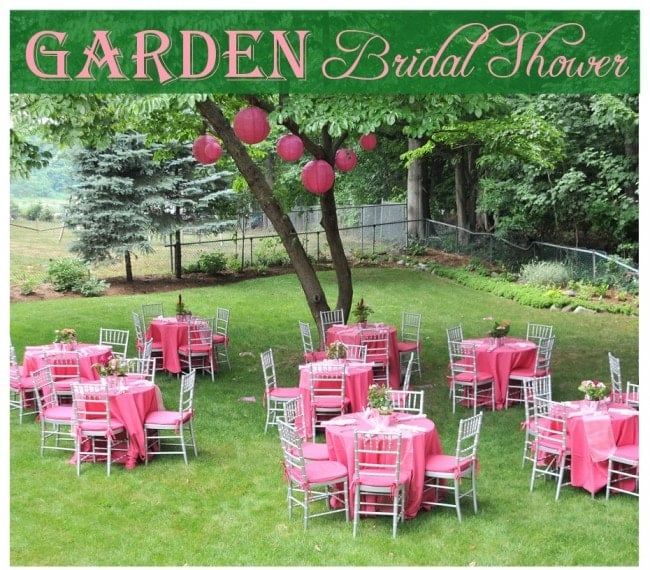 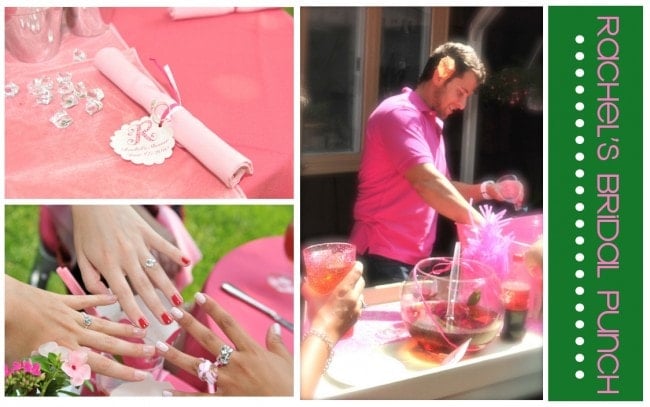 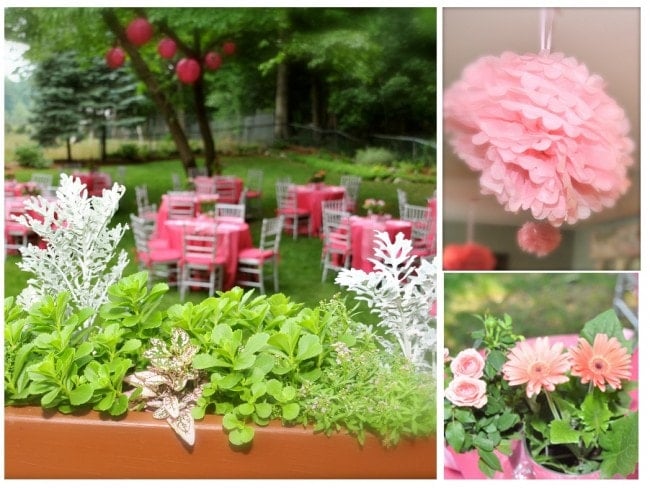 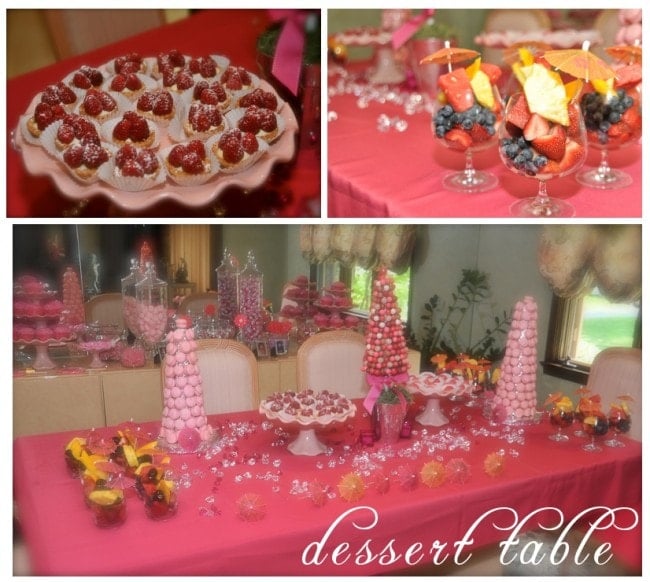 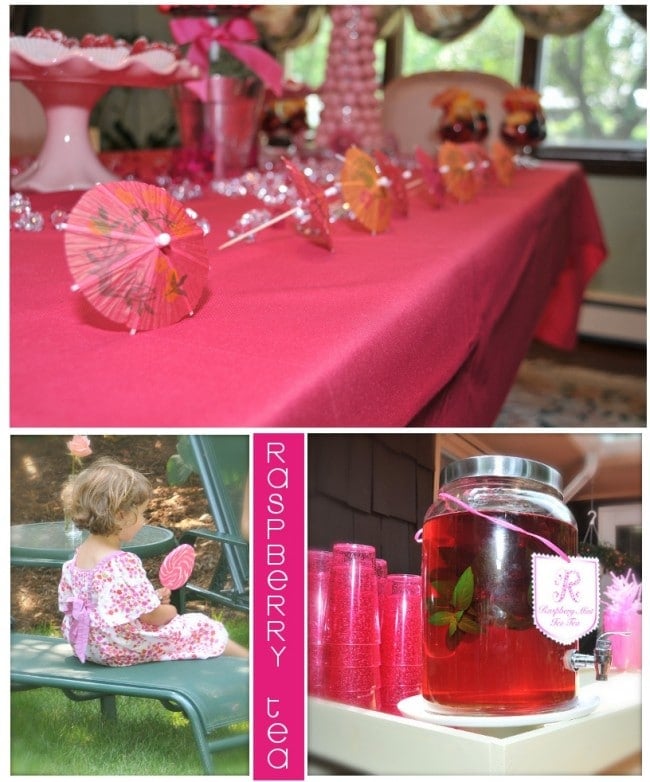 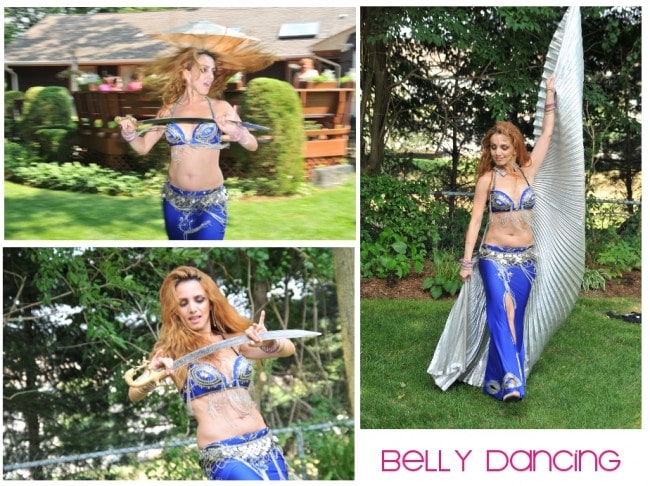 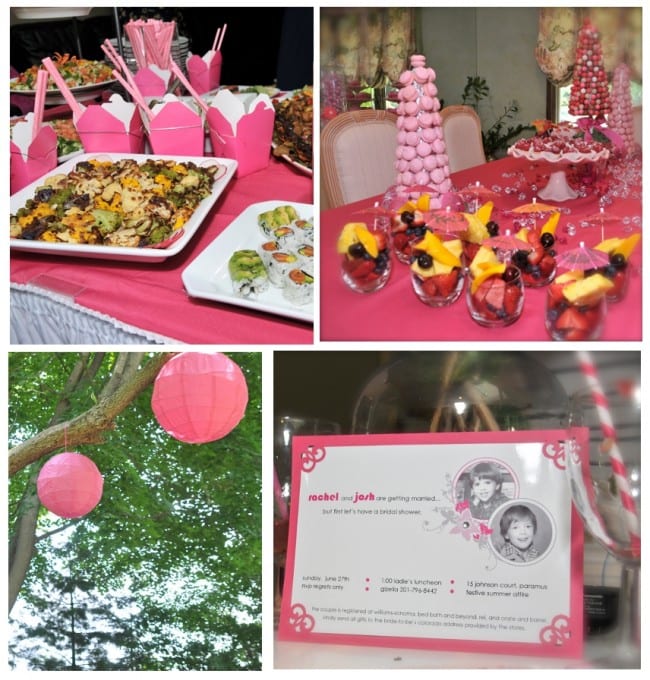 When Karina Plotko of KP Interiors set out to design a garden bridal shower, she knew she wanted to create “the unexpected”. She decided on fuchsia because it contrasted beautifully against the lush green backyard and would complement the modern elements of silver that she added. The only direction she had from the bride was “pink” so her twist with the fuchsia was perfect for the setting!

Since most women have been to numerous bridal showers, Karina set out to find a replacement to the traditional “opening of the gifts”. As she said, “In the age of registries, we all know what the bride is receiving anyway”. Very true.  Instead, there was a belly dancer who gave a performance and then taught a belly dancing class. Inside the house was a tarot card reader and a palm reader.  “This created a lot of buzz and interesting conversation,” Karina shared. I bet! What a fun idea and a neat alternative to the traditional shower!

The centerpieces of  silver pots in varying sizes with flowers in shades of bright pinks were also the party favors.  I adore this! Karina said that the tiny engagement rings tied around the napkins with pink twine were a big hit with bridesmaids that were awaiting real engagement rings!   The silver chairs with fuchsia seat covers are beautiful!  Karina said it was a big expense but really added some flair.  Sometimes you might find it is worth it to put some expense into a few elements to really take your event to the next level! The runner on the table is from a dollar store and is meant to be a chair sash. How very creative!

The bride’s family owns a restaurant, so they did a portion of the catering.  There was a bit of an Asian theme with sesame noodles in hot pink take out container with light pink chopsticks and lots of sushi.  Karina said that the ladies luncheon side enjoyed grilled vegetables.

The big hit? Rachel’s Bridal Punch! Thanks, Karina, for sharing this delicious recipe!

Blocked ice was used to keep the punch cool in the hot summer weather. The bartender kept the ladies smiling even before they had any punch.  For the non-alcohol drinkers, Karina made a raspberry iced tea filled with mint from the bride’s mother’s garden. What a sweet addition to the drink menu!

For the dessert buffet, she used different shapes and sizes of apothecary jars and filled them with pink marshmallows, pink hershey kisses, and pink rock candy lollipops.  For the cupcake tower,  there were pink frosted cupcakes covered  in a hand cut wrapper with the bride’s initial.  Karina shared that she bought the pink cake stands online from Horchow a few years ago and “they were well worth the cost since I’ve used them so many times.” I agree, Karina, find a few great cake stands and you’ll use them all the time!   There were also lots of oversized pink lollipops in round and flowers shapes. Darling! Karina did an absolutely amazing job on this garden bridal shower!