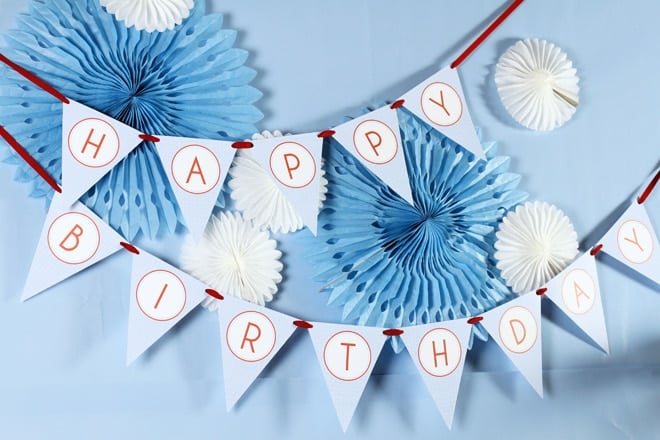 What is cuter than a helicopter themed birthday party? We can’t think of anything! This is one of the most adorable 2nd birthday parties we’ve seen! Submitted by Tali of A Party Studio, this sweet party is full of simple yet cute embellishments. We’re so inspired by all the clever phrases like “baggage claim” for the favor station and “fueling station” for treats…see all the pictures and read party details below… 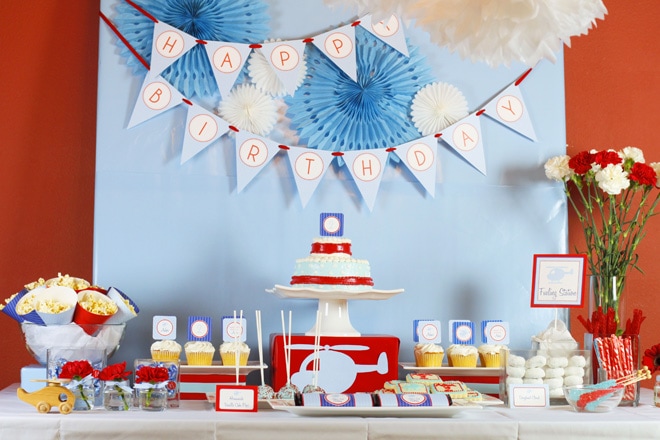 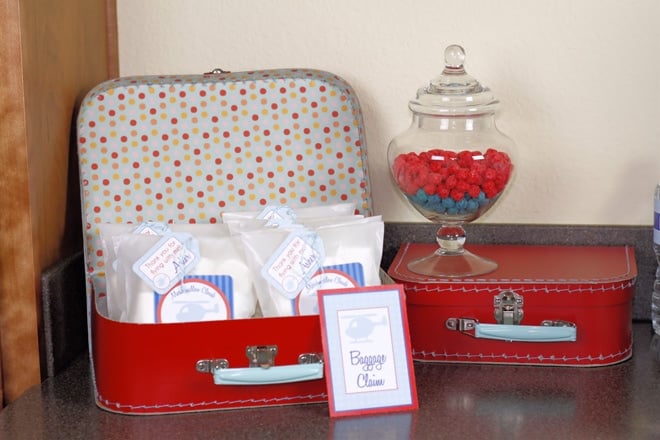 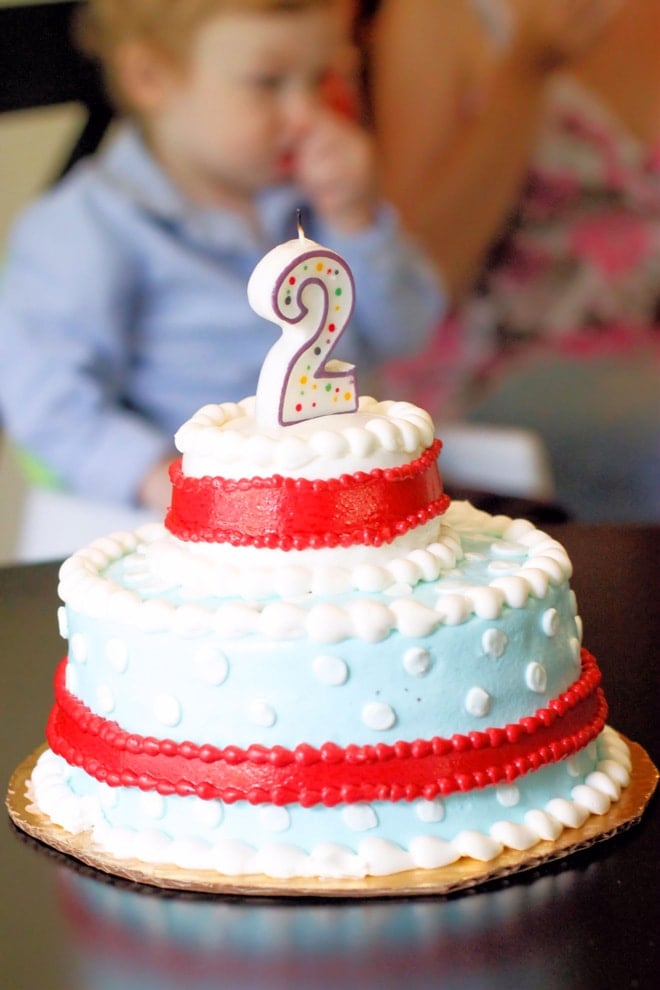 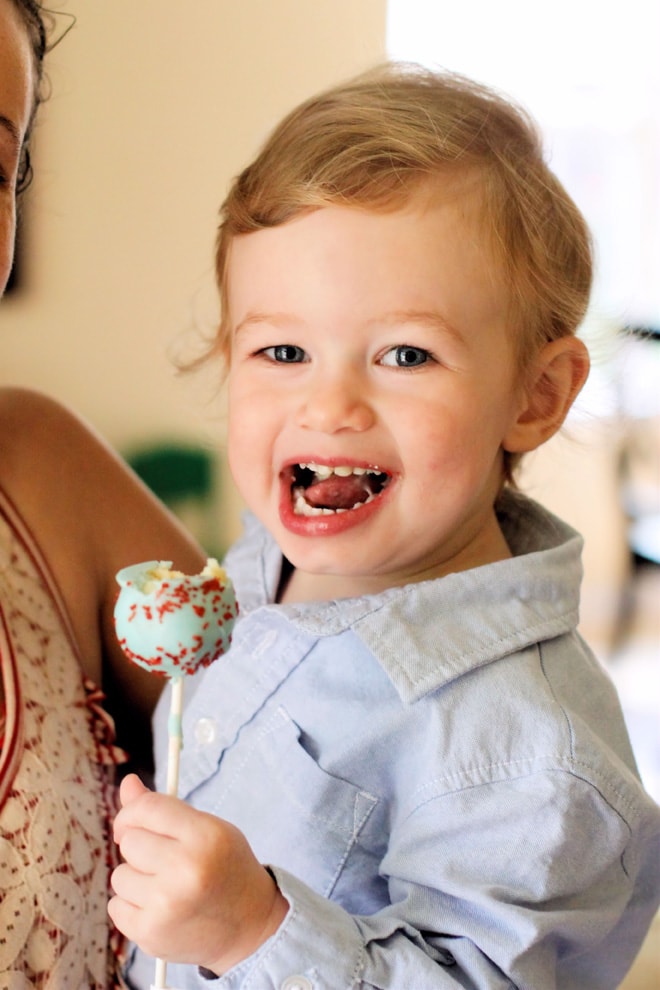 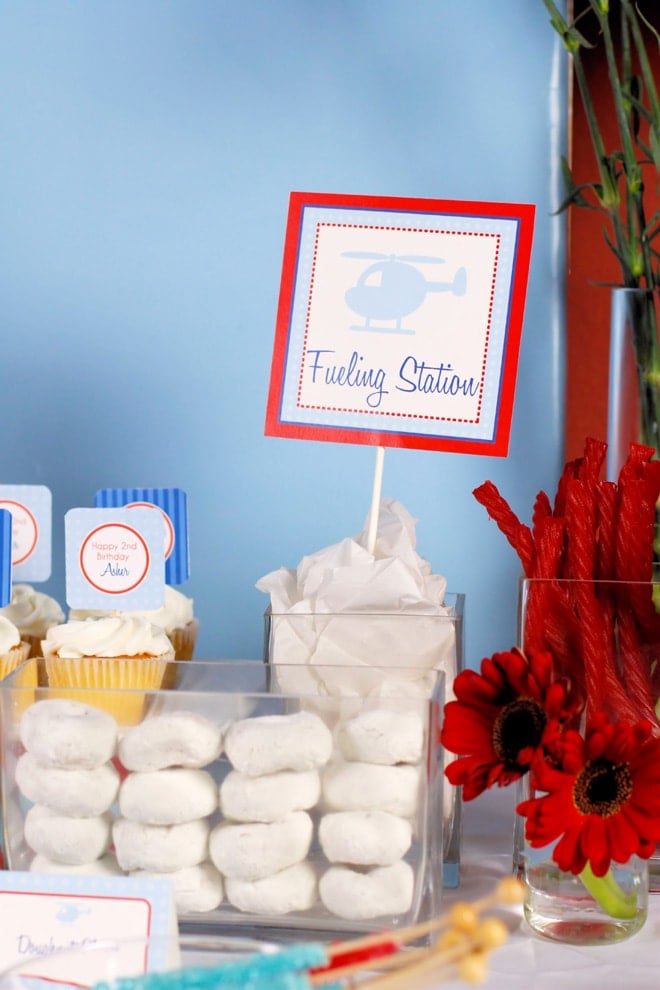 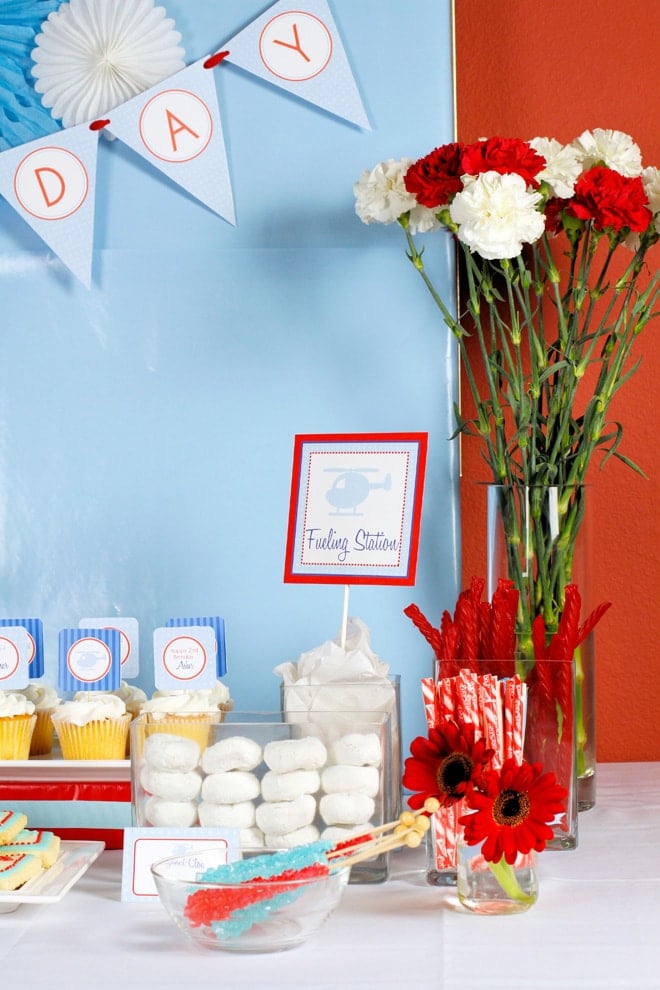 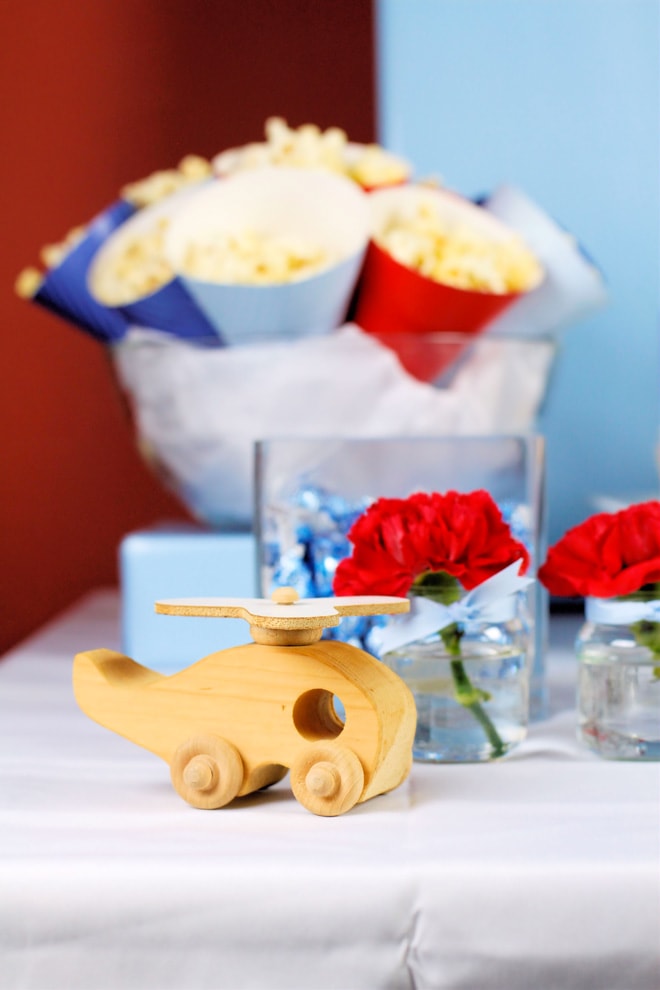 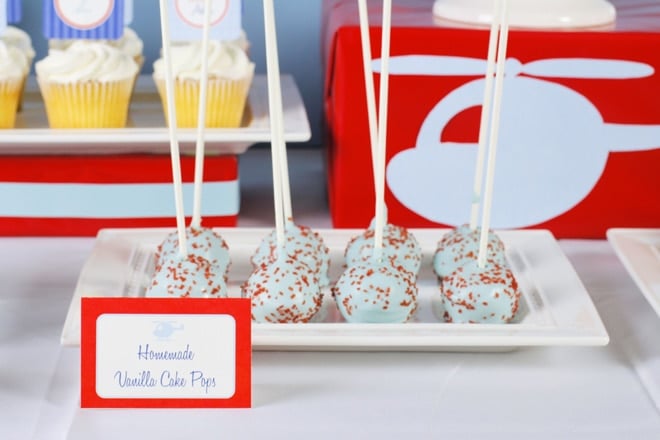 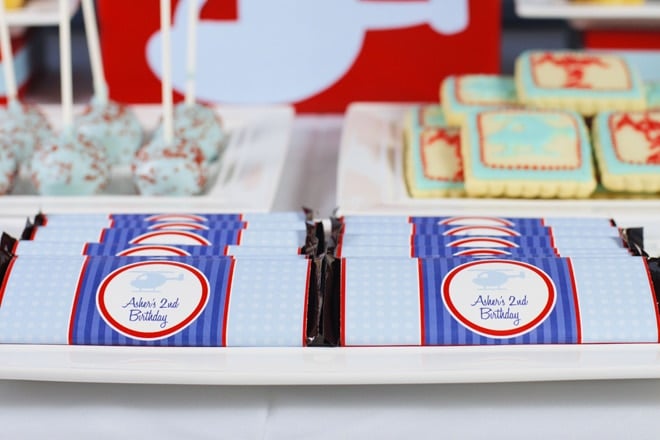 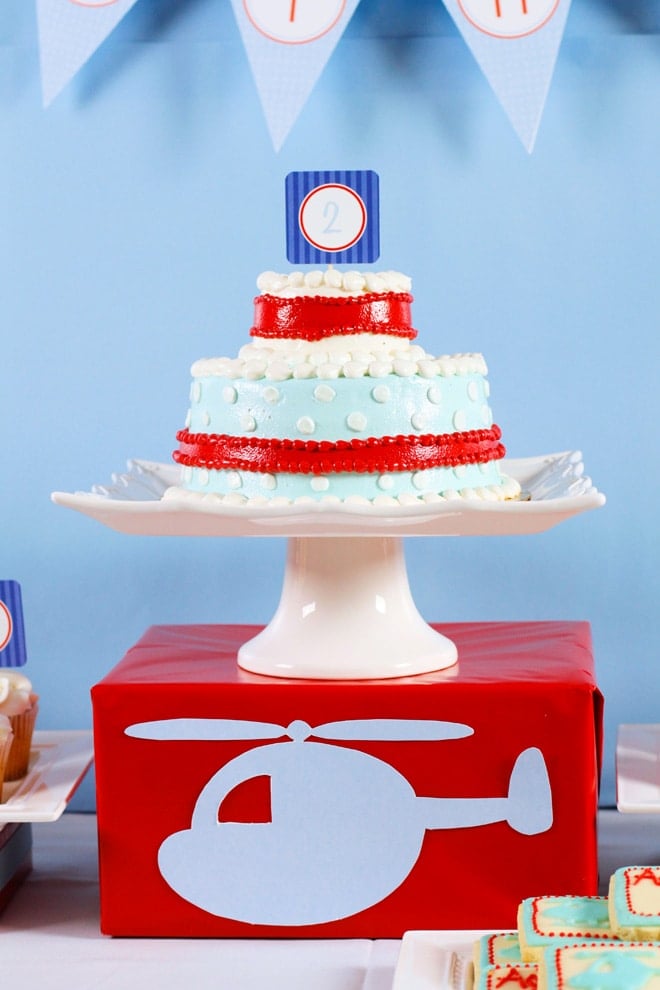 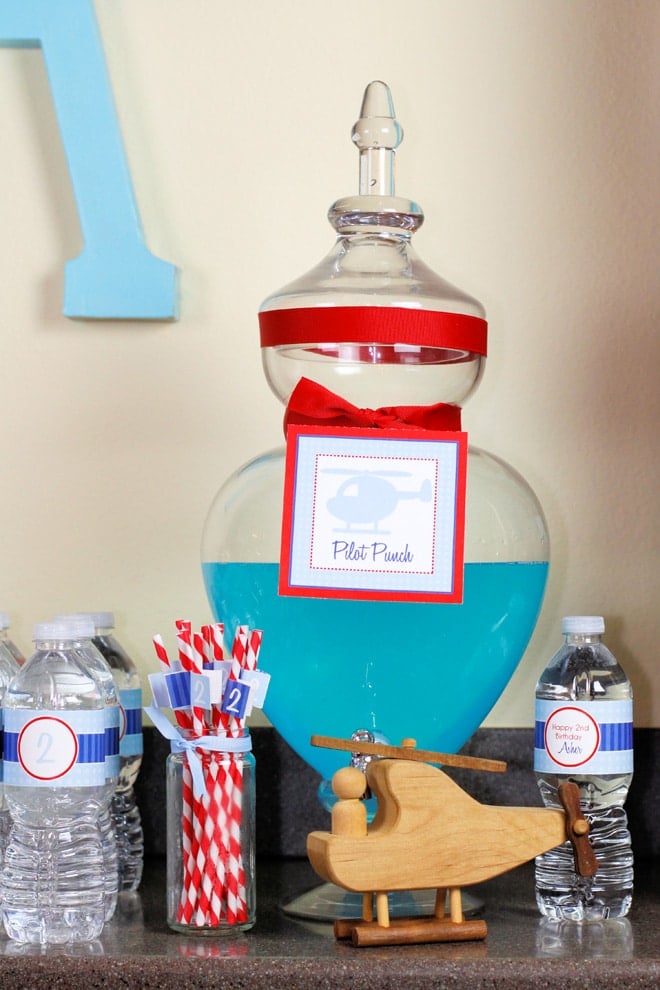 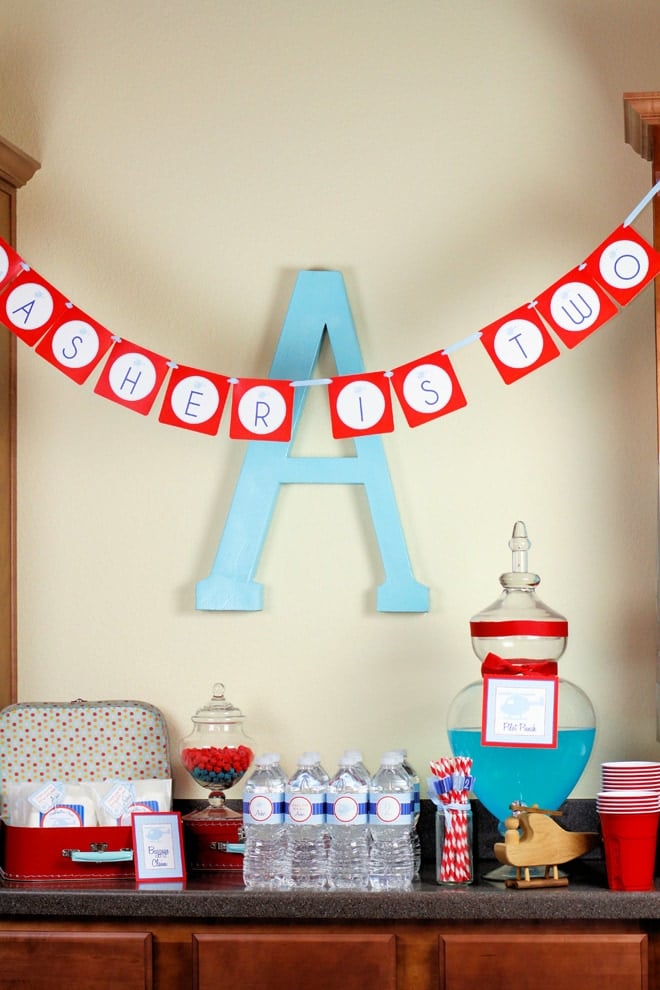 Happy Birthday to Asher! Tali was nice enough to share lots of party details with us so we hope you can find lots of inspiration for your own children’s parties!

“My son, Asher, is crazy about helicopters so the theme for his 2nd birthday party was very easy to decide.

For the decorations, I kept a very simple blue and red color scheme. I hung large white tissue pompoms from our chandelier to give the effect of clouds and I used blue paper fans on the backdrop. I purchased a wooden A and I spray painted it light blue. I figure that I can use this after the party in his bedroom.

For the dessert table, I ordered large sugar cookies from “C is for Cookie” to match the printables. One of my friends made vanilla bean cake pops for the table. She of course made them in blue and added red sprinkles. The chocolate cake and the vanilla cupcakes were from a local bakery. I also had Hershey Kisses which I’d personalized with stickers that said “A Kiss From Asher”.

Since his party was in the morning, we served breakfast food, including powdered doughnuts which we called “Doughnut Clouds”…. The kids thought that was fantastic. For the adults, we served a green chili sausage casserole and fresh fruit with dipping sauce.

The majority of the children at the party were aged between two and four years old, we decided to forego traditional party games. Instead, we had a plethora of toys available for them to play with and we set up a glitter tattoo station. That was a huge hit with the parents as well as the kids! Since we had Danielle from All Things Great and Small Photography taking photos at the party I was able to relax and do the glitter tattoos instead of behind a camera taking photos the whole time.

For the party favors, we gave out “Marshmallow Clouds”. These were basically glassine envelopes that I’d filled with large white marshmallows. I added a large label and tied a “thank you for flying with me” hang tag using blue and white twine. I displayed them up at the drink station inside a red cardboard suitcase with a tag that read “Baggage Claim”.  ” – Tali of A Party Studio

For more BOY Party Ideas, follow my Pinterest board here! You can also find more boy parties that we have featured on Pizzazzerie.com by clicking here!