If you’re looking for the easiest, most delicious pumpkin cinnamon roll cake, you’ve come to the right place! This cake reminds me of a blend between a pumpkin coffee cake and cinnamon rolls, a match made in heaven!

It’s pumpkin perfection in cake form! Enjoy a slice of this cake with a cup of coffee! If you are a pumpkin lover, you will LOVE this recipe.

While I love making cinnamon rolls, it can take some time when working with yeast. I wanted a pumpkin cinnamon roll, but in CAKE form. It’s truly the best of both worlds.

I also wanted this recipe to be super easy, so a cake mix helps make it a quick and easy breakfast cake (or dessert) that you can pull together for last-minute occasions. If you love pumpkin cake, you will LOVE this recipe.

Now you can call this a breakfast treat (it reminds me of pumpkin cinnamon rolls), but it definitely can stand alone as a dessert as well, so if you’re headed to a fall potluck or celebration and need a pumpkin dessert cake, trust me, this is your recipe!

It bakes up perfectly in a 9×13 pan so it’s great for cutting into bars or squares for serving a crowd! This would make the BEST quick and easy treat for Thanksgiving. 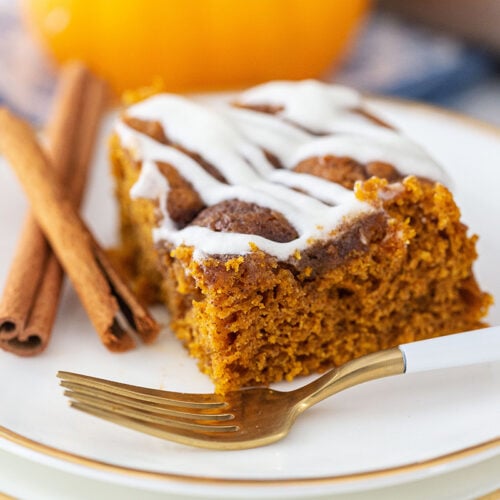 To Make The Pumpkin Cake: