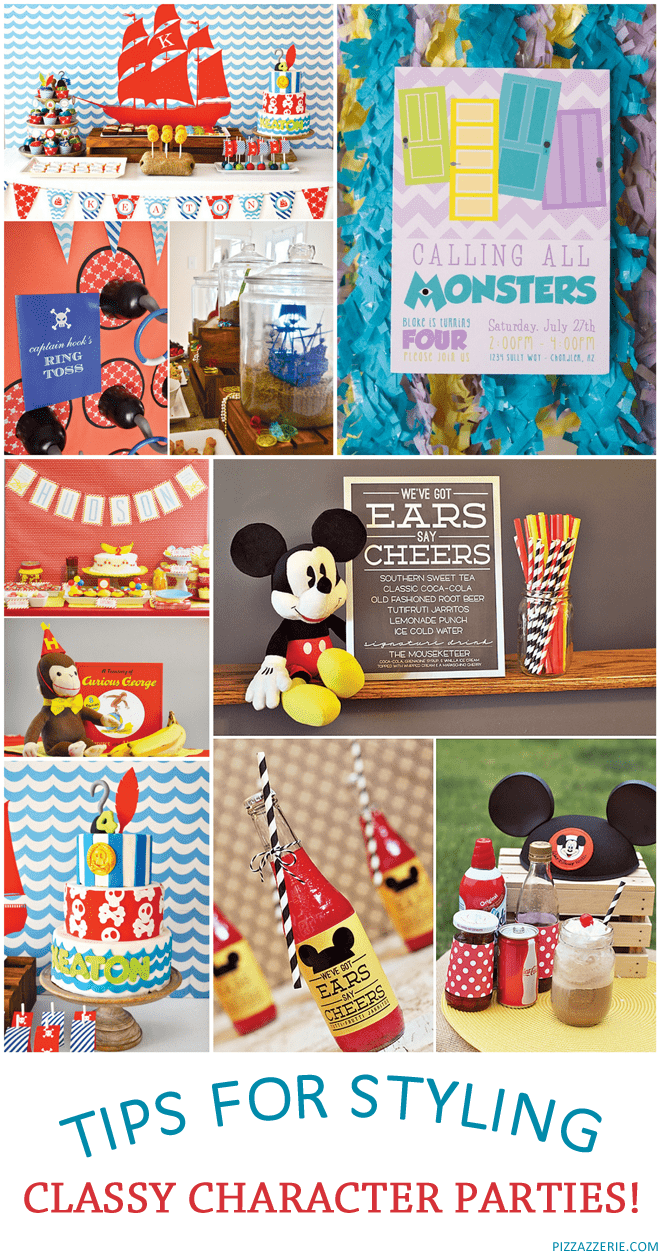 When my little guy was born, my ‘party brain’ went into overdrive & I’m fairly certain I had his first five birthday themes planned out before we even left the hospital. I envisioned celebrations with classic themes…. and not a television or movie character in sight.

Fast forward a few years, when this same little guy started telling us *his* opinions for how we should celebrate his birthday. Needless to say, they didn’t always match up perfectly with mine. He wanted his birthdays to include his favorite things– often characters from the books & movies he loved most. The heart wants what the heart wants…and his little heart wanted character parties. Badly. As his mama, I worried I would have to sacrifice style to incorporate his wishes.

Lately, character parties have gotten a bit of a bad rap in the blogosphere. These parties can sometimes be a little over the top and cheesy. More over, copyright infringement laws aren’t something to be taken lightly. If you’re working on a child’s birthday party, though, the request for a character themed celebration has probably come up during the planning process. But fear not– here are some suggestions for easy ways to incorporate your kiddo’s favorite character & still host a classy bash. Happy kids. Happy mommas.

1. Ma’am, Step Away from the Party Aisle.

If you’ve ever strolled down the party section of your favorite store, chances are, you’ve seen it. A wide array of characters peeking out at you from every cup, plate, decoration & napkin. It’s a little visually overwhelming if you ask me. Not to mention expensive. Just keep walking until you come across the solid/pattered party ware section. Trust me on this one. A plain plate or a polka-dotted napkin is just as useful, probably cheaper– and a whole lot easier on the eyes!

Many stores (and online sites such as Etsy) offer a huge variety of printable or ready- made “character-inspired” sets that coordinate with just about any theme imaginable. If you have a crafty friend or relative, you could also ask them for some party prep assistance.

If you simplify your decorations, not only will the party prep be easier, but also less expensive. Instead of plastering your event space with character products, let a few pieces be the focal points. Less is more when it comes to party decor. Leonardo da Vinci once said, “Simplicity is the ultimate sophistication.” I’m pretty sure he wasn’t *exactly* referring to party decorations, but hey. It still works.

Every beloved character has very recognizable visuals– part of what makes them so popular with the young crowd. Examine your child’s favorite character closely. Is there a color scheme, pattern or texture that instantly distinguishes that particular character from the rest? Yes? Great! Start there.

Try to come up with 3-4 colors, patterns or textures that represent the character and incorporate them into your decor.

I’m in the process of planning a character-inspired party for my youngest son’s third birthday. I bet you’ll know exactly who his favorite character is just by looking at these four patterns together. 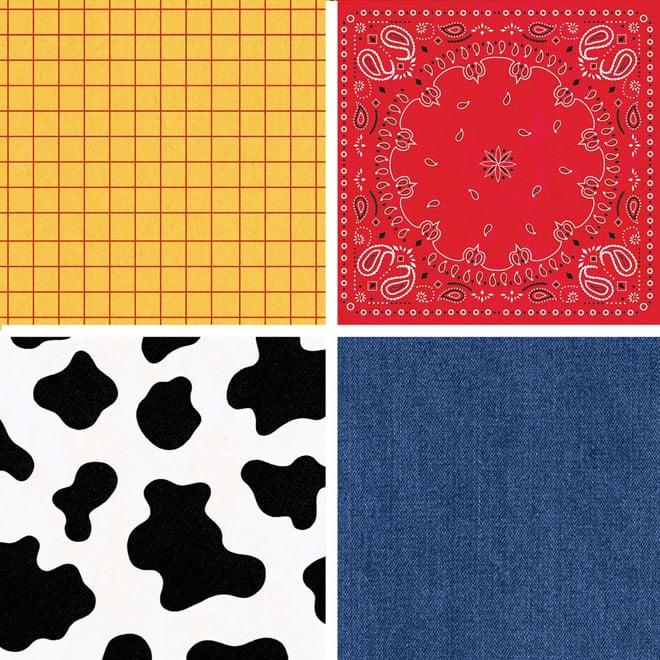 No images of a certain toy sheriff to be seen, but you probably guessed that my little man loves Woody right off the bat.

Two Sugar Babies‘ Charynn incorporated the bright colors, signature stripes & a wave pattern from “Jake & the Neverland Pirates” when she hosted her son’s fourth birthday party. There’s so much to love about this celebration! She also ingeniously displayed silhouette versions of a few characters to connect back to the show. The theme is perfectly evident, but not at all overwhelming.

So if you’re not using character images…. what are you going to use? Think about an item or visual that relates back to the character. Instead of Elsa & Anna clip art, a snowflake motif would work well. Rather than Thomas the Tank Engine everywhere, perhaps train tracks could be an element carried throughout the party. It helps to brainstorm several ideas that might work & then decide upon one or two elements so that everything is cohesive. 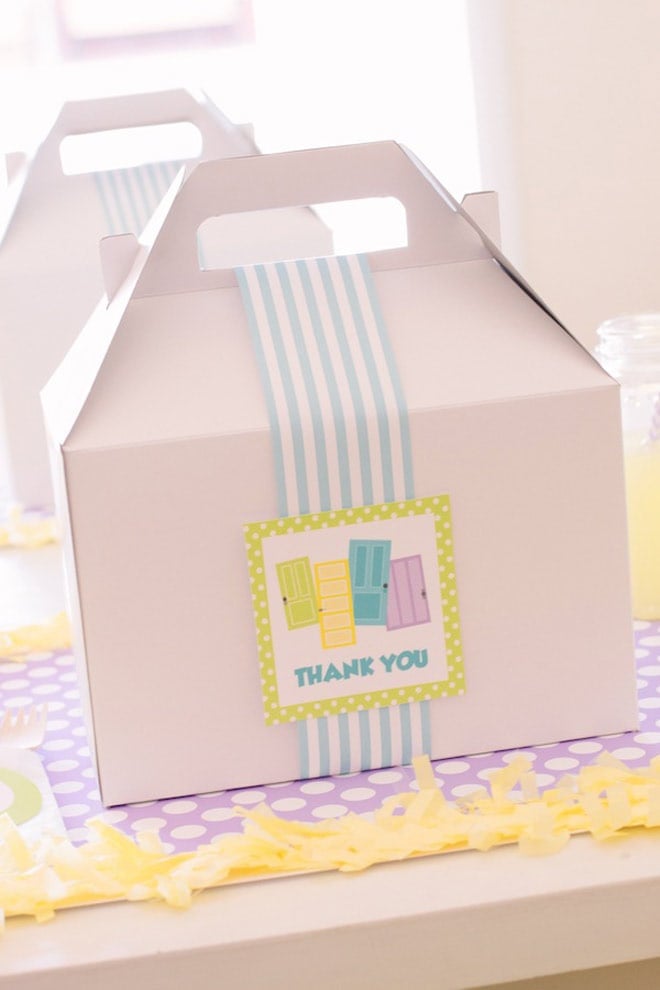 Rebecca & Shannon of Petite Party Studio styled this incredible Monsters University party & nailed it! They used the iconic doors from the movie as their central, repeated motif. Brilliant! Not a character in sight, but immediately, anyone familiar with Mike & Sulley knows this is a Monsters themed party.

When I found myself planning a or my son’s Curious George party (that he oh-so sweetly requested), I wanted to create a vintage vibe reminiscent of the H. A. Rey books he loved so dearly. I searched high & low. Nothing. Instead, I decided to use a banana as the “logo” for the party. I used a banana on the invitation, the banner, cupcake toppers & even an artificial banana on top of the cake.

5. Use an Unexpected Color Scheme

The great thing about ditching the store-bought party ware is having the freedom to use any color scheme you can dream up. When I saw photos from Nikki Hernan’s fantastic monochromatic superhero party, I was in love! Instead of incorporating multiple colors from each of her son’s favorite heroes, she stuck to a classy black & white palette. Not only does the party have a very high-end feel to it, but just about everything can be reused over and over again.

6. Change Up the Style

Usually, those items you find in the party aisle are all pretty much the same. Different characters, but basically a very similar format. Not much room for stylistic interpretation, unfortunately.

Another benefit to using customized party decor is the ability to change up the style to make it suit your taste. When putting my thoughts on paper for a Mickey Mouse party last year, I didn’t want it to look like any other Mickey party. I swapped out the bright, bold primary colors for a more subdued (but still cute!) rustic vibe. Using kraft paper (my favorite!) and chalkboards, I “vintaged” his party right up & it’s still one of my favorite parties to date.

When revamping a theme to suit your style, there really are no limits. Your party can take on a preppy, bohemian, vintage, rustic, or modern feel regardless of the theme. It’s completely up to you.

7. Use Items You Have

Last but not least, take a peek around your house. Perhaps you have some toys or figurines of that beloved character that you can incorporate into your decor. This is a budget-friendly way to sneak that character into the party in a few more places & your child will most likely be thrilled to see his/her favorite toys being showcased.