A delicious fall twist to one of our favorite classic cocktails: Moscow Mules! If you love apple flavor, you’ll love these Apple Cinnamon Moscow Mules!

Sometimes when you’re walking through Target and find mini copper mugs, you buy them solely because they’re mini and you have to have alllllll the mini things. Am I right? Yes.

What could actually be cuter than mini Moscow Mules? Yes, you can go back for 4 more after since that itself will only equal one full drink, but that’s not the point.

The point is HOW CUTE are these? Greet your guests to a little sippy sip of Apple Cinnamon Moscow Mules at your fall dinner party (remember when I charged you each with the mission of throwing a fall dinner party? How are we doing on that friends?).

So that’s the story behind this fall beverage. It’s like that with a lot of my parties and ideas to be honest. I’ll find an amazing fabric pattern or a must-have cake stand and then design a tablescape around it. Whenever inspiration strikes basically!

These mini moscow mule mugs = inspiration striking! Plus, little Blakely thinks she can play pretend “tea party” with them, so that’s a win-win right there.

So I just recently became a fan of Moscow Mules, and I actually really prefer the apple cinnamon touch. Also, it’s finally getting chilly in Nashville so everything fall-ish just tastes better! Apple, Cinnamon, and Pumpkin = bring it on! 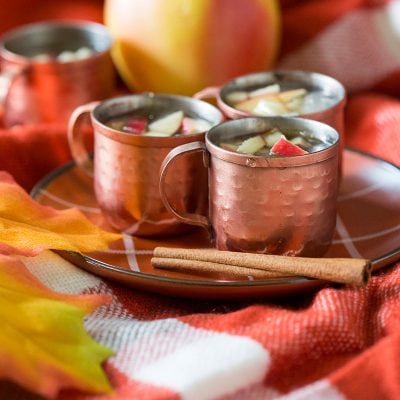 Lime wedges would be another fitting garnish or go all crazy and do orange slices too! No rules, friends. So if you make these for your family or friends, shoot me a picture! I’d love to see it!

More Fall Cocktails? Got it!

Speaking of fall recipes, I also shared this delicious Bourbon Apple Cider Cocktail which you have got to try if you’re a bourbon fan! My husband and I love it (and I’ll admit that I’m not even the biggest bourbon fan).

And last but not least, this Sparkling Apple Cider Sangria! If Chris and I could get married all over again, I would have a fall wedding. Then, this drink would be my “signature cocktail”. It’s that good!

Cheers to a fabulous week ahead!