Howdy, friends! So turns out that half of my Instagram followers are as obsessed with banana desserts as I am! I received so many messages when I posted the making of this Bananas Foster Cobbler recipe!

I made it multiple times until I could get the ratio of cinnamon, rum, and all the deliciousness justttt right. Hard job, huh?

I wanted to combine my love for this classic New Orlean’s dessert with an easy-to-make “feeds a crowd” recipe. This banana’s foster cobbler does the trick!

I know Banana’s Foster doesn’t have pecans on top, but that’s my addition because I love the crunch and nutty flavor it gives this cobbler! You can trade them for your favorite nut or leave off.

I think serving it with a scoop of vanilla ice cream (or whipped topping) is sort of a requirement, but my husband wanted to note eating it with a spoon direct from the cobbler dish when it comes out of the oven is also an option. He’s obsessed with it, and I’m actually the banana fan in the house. Basically, this Bananas Foster recipe is a WINNER.

I always order Bananas Foster if I see it a menu, but making it at home sounds like it would be a bit of an ordeal. One in which I could potentially burn my house down so let’s all go with this easier route, yes?

You can leave out the pecans if you wish or try a different nut (I love walnuts too), but the pecans were so southern and fitting in this recipe!

If you want to try another favorite banana recipe, this banana pumpkin bread is sooo delicious! If it’s not fall, you’re still allowed to have pumpkin, P.S. This is so good year-round! Usually I think apple reigns supreme when it comes to cobblers and pies, but it’s about time bananas has its day!

If you want to get fancy, you could bake this bananas foster cobbler into ramekins for individual sized portions (just reduce cooking time), but I’m a big fan of ease.

I think it’s easier to bake it all at once and scoop into miniature serving dishes. Then your guests can go back for more and since it’s so delicious, they will be doing just that. 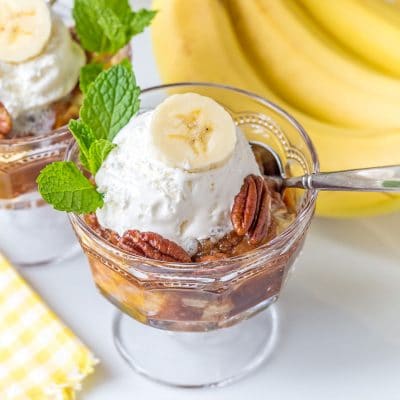